Whether it’s your first or your fifth, you can never be too prepared for welcoming a new baby into your family. Here are my top tips for preparing for baby!

1.Keep everything in it’s package (with the receipt if you have it) until you need to use it. There are so many items I bought or received that I ended up not using and ended up returning. If I had taken the item out of the package, there was no way to return it, and that’s money sitting useless when it could be exchanged for something you didn’t know you needed like baby Tylenol, more nappies or diaper cream (anyone else surprised at how expensive diaper cream is?!)

2. Only wash a few newborn sized clothes and the burp cloths. This goes with the same tip above. So many moms go crazy in the nesting period and rip the tags off all baby’s clothes from 0-6m (or bigger) and baby ends up not wearing half of it, and she’s stuck with it. Babies grow at such a varying rate and there’s no way of knowing what size baby will be in and what season. You will find in the first few weeks that you most likely aren’t leaving the house and have no reason to change baby out of its sleeper, except maybe to change it into another sleeper. Another easy at-home newborn outfit is a side-snap vest and diaper and socks, as baby will most likely be wrapped in a blanket sleeping most of the day. We ended up doing laundry almost daily. Baby does a looooot of sleeping those first couple weeks and you can actually get a few things done, providing you feel up to it. My babies just wore the same three NB onesies until they grew into the next size two weeks later (I also have large babies.) As baby grows, you can easily throw in a load of laundry for the next size up, and take the tags off clothes at that point. Any other unworn clothes can be returned with the tags on or…. yes I’m going to say it…. re-gifted!

3. Preparing your older children by fostering their age-appropriate independence This is the biggest, and I believe most helpful piece of advice I can share. My oldest was 2 1/2 when my second was born. my second will be barely two when our third is born. I have done my best to work on their individual skills so they don’t need my help with every little thing when baby arrives. When Shep was born, Dexter was drinking out of a regular cup (we were done with the lid sippy cups). It doesn’t seem like a big deal skill until you are nursing a newborn on the second floor of your home and the toddler needs a drink of water- he can go downstairs and drink out of any clean cup he finds without spilling. Learning to put his socks and shoes on was a HUGE DEAL when we were hurrying to get out the door with a toddler and newborn. He had mom-approved snacks that he could reach on a low shelf in the pantry and knew any food or drink was to be eaten at the kitchen table. Here are some things I am working on with Shepard before baby arrives (he’ll be 25m):

-safely walking up and down the stairs unaided. He is currently 37lb. I am 31w pregnant. He sleeps on the 3rd floor and I am officially done carrying him up and down those stairs whether he likes it or not! Also, I have him climbing up and down from his high chair so I don’t have to lift him. Not only is it difficult to lift a toddler as pregnancy progresses, you never know if you will be recovering from a c-section once the baby is born and have a lifting restriction for the first few weeks!

-Tidying up his mess. If he spills his milk, he’s helping me clean it up. If he throws his blocks in a fit – great, he’s picking every last one of them up. If he eats a banana, he is to throw the peel in the garbage.

-dressing himself. Pushing down pants is hard for a toddler. This is quite the hurdle at the moment!

Do not underestimate your child’s ability to grasp simple concepts like cleaning up after themselves at this age. You may be surprised that they enjoy their new found independence and beam with pride for the praise they receive from it, which encourages them to build further independent skills. We also talk to our kids about how important their roll is as big brother and how we will need their help when baby arrives. Again, this builds their confidence to feel a bit grown up like a “big-boy,” and helps them to understand when baby comes that they have a new and very important title.

4. Get out of the house with your spouse. Go to breakfast, go to church, Home Depot, wander the aisles of Target, go to happy hour and have him let you smell his drinks (anyone else do this?) Slap some preparation H on your hemorrhoids and go for a bike ride. Just get. out. of. the damn. house. Because once that baby comes, you’ll be scared to go anywhere with it for the first week. Then you’ll hit your stride and start taking baby out with you, and think “this is amazing! The baby just sleeps so we can enjoy a quiet dinner while the baby naps in his carseat!” Then week five hits, and that baby is more awake, more alert, and isn’t down for happy hour like he used to be. Then you’re stuck back in the house because you feel too guilty to get a babysitter while baby is so tiny. Before you know it, you have an eight month old and realize that’s as long as it’s been since you’ve had a date night.

5. Find a pregnant friend. Already have enough friends? That’s great. Find a new one for the time being. Someone that will be going through the same baby woes as you. Someone you can text throughout the nights while you’re both up for feedings. Just someone to compare notes with and have a moan or two every now and then. With my first pregnancy, this was my neighbor- whom I hardly knew at the time, but we instantly became close and still are today. With my second, it was a co-worker that worked an opposite schedule from me, but once we started texting, we became great friends and remain close. This time around, my sister and I are expecting two weeks apart. (It doesn’t get much better than being pregnant with your bestie!). I have also built great relationships via social media. New mom Facebook groups, pregnancy app community forums, and even Instagram are a great place to find new moms who are trying to figure it all out just like you. Antenatal, pregnancy fitness, and birthing classes are also GREAT resources to meet new moms and parents!

What are your favorite tips for preparing for a new baby? Comment below, I would love to read them!

2 thoughts on “5 Tips for Preparing for Baby” 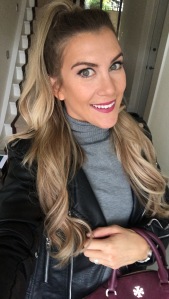 Minnesotan at heart, living as UK expats in London with my husband Matt and our three boys. Sharing my day to day style, expat experiences and travels, and our personal health endeavors with Stickler Syndrome and Tetrology of Fallot.